Ways to keep going when it feels like you’re walking up-hill in a snowstorm (with a piano tied to your butt)! 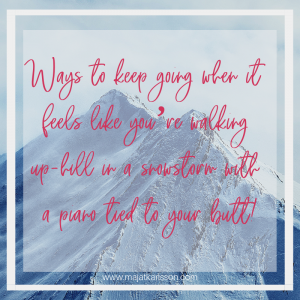 Have you got what it takes to walk up-hill in a snow-storm?

In my “day-job” I am a health care manager. I’ve been doing this particular work for around 5 years. Just after I started, my manager asked me to focus on a new initiative. I didn’t know exactly how I was going to achieve the expected outcomes because there was no clear blueprint to follow AND it required a real change in thinking for the health care providers involved.

For most of 2014, all of 2015 and half of 2016 I worked on this initiative. As I mentioned, it was a significant change in practice for many health care providers and the work happens to be laden with stigma so things moved forward very slowly.

Many days and weeks I wondered if we would ever achieve success. Meanwhile we were having successes in other areas so I kept going.

As for this major project, I received many messages telling me that I (and the program) were taking the wrong approach, that we were wrong. But I KNEW that those who thought this were afraid of change. I knew I wasn’t afraid of change.  And much more importantly I knew that if we could implement this program we would make a huge impact on the health of vulnerable people. Many, many times I was ready to walk away from this initiative. It would have been easier to do so. We were having successes elsewhere; why continue with this seemingly unbeatable project?

Well, we (me and my amazing team) did keep working, quietly, slowly, deliberately throughout 2016, 2017 and 2018. We learned, built our experience, and focused on the long game. And one day, just over 4 years after I began, we had a conversation with someone who was able to connect us with an influencer who “bought in”. We had no idea the power of THAT conversation before it happened. We just brought our A-game to the conversation the same way we always did. The “influencer” might not have agreed; he might not have had the influence. We didn’t go in expecting success, rather we went in knowing that we were on the right path and that one day things would shift.

4½ years after we began, the initiative finally went “live” on December 10th.

To be honest I think I was shocked that we had finally achieved what we had worked so hard for. I expected to be told every day of those last 6 months that “they” were wrong and we were not going to succeed. But we did. Despite launching, in all honesty I didn’t start to celebrate until about 3 weeks in, when I came back to work after my Christmas holidays and we could see a couple of huge successes. I began to quietly cheer all the people who made this happen…

You see, in early January we started to get messages from various stakeholders about issues they were experiencing. The issues started off quietly but then began to get louder and from more directions. Unanticipated consequences of success. Things that are bound to happen when you make a huge system change. This program shone the light on a bunch of system issues that had been mostly hidden before. This initiative had made some people really unhappy. And some of them are pretty important decision makers.

Interestingly I realized that most of these new barriers, despite challenging, didn’t impact me the way that barriers had in the past. I guess I had built my personal resilience. We began to work through issues. We wrote memos, had meetings, made structural changes, and influenced important decisions. We were on our way to “fixing” most of the day-to-day problems and making a case for improving some of the bigger challenges.

As of last week, I would have said in the next couple of weeks we were “home free”.

And then today happened. We had “solved” one of the biggest issues and we were having a final implementation meeting with IT. At that meeting we were told (this is paraphrased), “What you want to do is impossible.” This statement sets us back at least a year.

For a few hours this afternoon I decided I was ready to give it all up. All the hard work, everything. If this IT issue couldn’t be solved then we may as well just stop trying.

Again, just like years ago, it would have been way easier to give up. It really felt like we were dragging that piano up a snow-covered hill!

But surprise, surprise, that voice of resilience started whispering in my ear and reminded me that I had a really good reason to see this project through these challenges. That nothing worthwhile is ever very easy and that if I had made it through all those other challenges then most likely we could find our way through this one too.

I don’t know what tomorrow will bring on this project but I see that I have to continue to play the long game. And the long game is like life – it needs constant flexibility and movement.

So how does this apply to you?

Considering this experience made me think about any kind of personal or professional change we might want to make. The idea sounds good. We get started and maybe have some successes and definitely we have some real motivation. And then we begin to encounter barriers (think failure, hardship, harder work than expected). So often the barriers make us think we’re on the wrong path so we begin to focus on other things. Or maybe we convince ourselves that the plan we were going to take isn’t going to get us where we want to go. But then underneath there is a little voice that starts to make itself known and we realize that if we want to be true to ourselves we need to keep going. And then another wall shows up in front. How often do we give up because it just seems like we’ll never have long term success?

Because I know how important it is to the world that we all live into our best selves, I wanted to share some of the things that really supported me to build my own personal strength and perseverance.

Expect failure and hardship. When you’re trying something new, assume that something will trip you up.  Work on your “fail forward” attitude. This is where you see failures as successes you can learn from. When you expect this to happen, you’ll be readier to manage when it does.

Know your why. Keeping the health of vulnerable people front of mind made it impossible for me to just walk away from this work that would have been so much easier to forget. What is your reason for continuing?

Expect that everyone you meet could be your “influencer”. Share what you’re doing with people in your life, new and old. Want to get fit? Tell your colleague at work. Want to find a new client? Mention it to your neighbour. Who knows who that person you never considered before might know!

When things get hard, be gentle with yourself and take a break. No one can continue to push for months and years. When you find yourself feeling weak, treat yourself as you would a dear friend. Walk away for a while, rest and build back your strength.

Build your team around you. The project I’m working on started out with just me and my manager working. Now there is a small team. When things are hard for you, rely on someone else. The only way you will get to the other side of important challenges is to leverage the strengths of many.

I’ll end today by wishing you a saying that is tattooed on my husband’s leg:

Enjoy that blog post? Get more delivered right to your inbox!

Plus other tips and strategies on simplifying your life so you can beat overwhelm and experience more joy!

Enter your details to join my newsletter...

and get my FREE "Live More Simply" workbook as a bonus!

Get on the waitlist for the next round

of the Refreshed Life Program!

Enter your email address and be the first to know.

Get on the waitlist for the next round

Enter your email address and be the first to know.